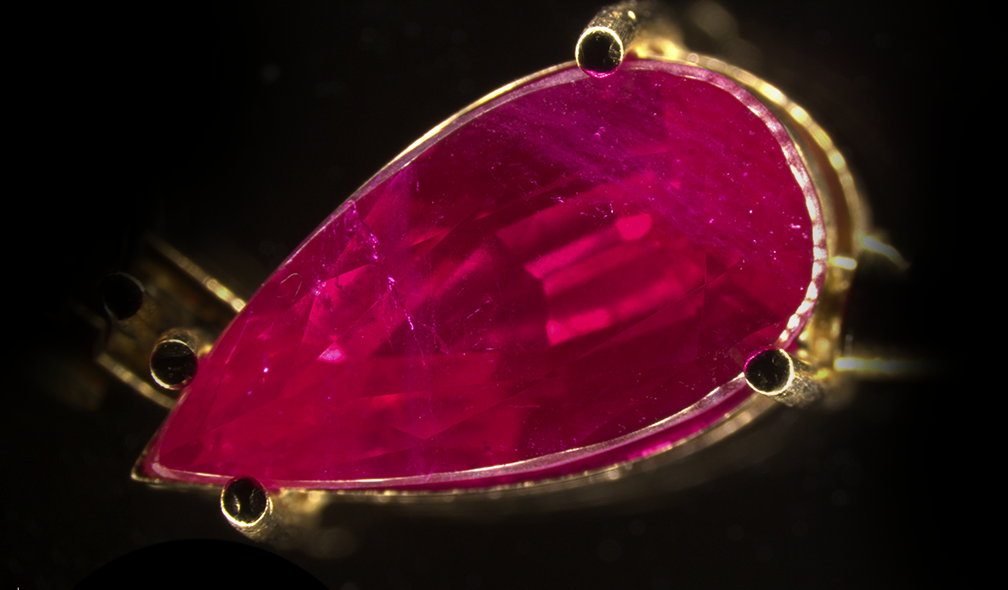 A necklace with rather important sizeable rubies was submitted to GGTL Laboratories Liechtenstein with the request to identify treatments and country of origin. The piece was mounted with ≈ 50 stones of high quality and very attractive and saturated red colour; the stones were somewhat included and showed mainly fingerprints and clouds amongst other small and atypical inclusions (Fig 1).

At first glance under the microscope, we noted that most of the stones resembled to what one would normally call heat treated with some glassy residues, but that none of the inclusion scenarios gave away any possible country of origin, something highly unusual when an experienced analyst observes such stones. This fact led immediately to the suspicion that the rubies were flux-grown synthetics; to confirm this the stones were more closely inspected by microscopy, followed by infrared spectroscopy, chemical analysis and finally DFI fluorescence imaging and spectroscopy. Chemical analysis of the stones showed that they were all lacking gallium and vanadium and that they main chemical characteristics were high chromium content and low to moderate iron content. This by itself was practically proof that the rubies were indeed flux synthetic rubies, and not natural as believed by the client. A closer look at the inclusions allowed us to identify some features besides glassy residues and clouds that clearly pointed towards flux-grown synthetic rubies; these include some tiny metallic inclusions including some platinum needles and hexagonal platinum platelets (residues from the growth crucible) and a few unusual multi-phase inclusions made of flux and gas bubbles.

A series of inclusion pictures of the stones is shown below: a) to j) various forms of residues from the flux used for the crystal growth; k) to n) platinum inclusions (needles and platelets); o) to p) dust-like stringers, “comets” and clouds that appear blue from Tyndall scattering; q) large multi-phase inclusion consisting of flux and gas bubbles.

Figure 2, a to q. A selection of inclusion micrographs representing some of the features found in the flux synthetic rubies. Micrographs T. Hainschwang. 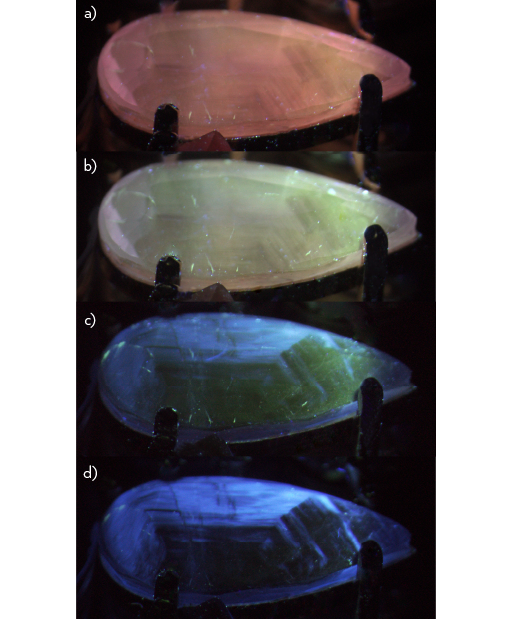 Figure 3, a to d. One of the flux synthetic rubies under four different excitations of the Mega-DFI system, decreasing wavelength from to bottom (<300 nm). The green fluorescence is unique to such synthetic rubies and identifies them unambiguously. Luminescence micrographs T. Hainschwang. 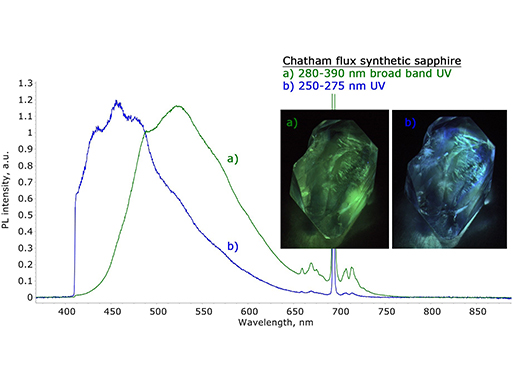 Figure 4. The blue and green fluorescence of a Chatham flux-grown blue sapphire when observed under the DFI system and when measured by the spectrometer of the system; broad bands were found to be responsible for the two different fluorescent colours. Luminescence micrographs and spectra T. Hainschwang.

The encounter of flux synthetic gemstones in jewellery is rather unusual; unfortunately, in all cases ever encountered at our laboratories the stones were disclosed as natural, their identity was not indicated in a single case.

Every once in a while a flux-grown synthetic ruby is identified at our laboratories, but this is the first time ever that we have seen a piece with that many large flux-grown synthetic rubies. Such synthetics are comparatively difficult to positively identify and if tested only by microscopy they can be easily misidentified as natural rubies. While the flux in many of such synthetics is very coarse, not perfectly transparent and often yellow rather than colourless, the flux inclusions of the 50 stones in this necklace looked very much like what you would find in flux heated natural rubies. The flux was perfectly transparent and colourless and rather fine with only a few coarse obvious flux residues.

A combined analysis of the microscopic properties of such stones, their chemical composition and their fluorescence will in all cases unambiguously identify them as flux-grown synthetic.

It is of utmost importance to perform such analyses carefully to avoid the misidentification of such synthetic as natural gemstones, as it apparently has happened in the case of these synthetic rubies.