Natural pearls of the Veneridae family

The best-known natural pearls from bivalves of the Veneridae (classified by Rafinesque, 1815) family are those from Mercenaria mercenaria (Linnaeus, 1758), also known as “quahog” pearls from the mollusk’s common name, northern quahog or hard clam. These non-nacreous pearls range from “cream” white to brown, and from faint pinkish purple to dark purple, though some are pure white (e.g., figure 1). Like other natural pearls, quahog pearls are seldom perfectly round; in rare cases, circled quahog pearls occur (figure 2). M. mercenaria bivalves are found along the Atlantic coast of North America to the Yucatan Peninsula. The species also has been introduced along California’s Pacific coast. However, M. mercenaria is not the only mollusk of the Mercenaria genus to produce pearls. White, “cream,” and sometimes brown non-nacreous pearls can be found in another species belonging to the same genus, M. campechiensis (Gmelin, 1791), or southern quahog. This species is found in the southern part of the M. mercenaria distribution area. M. campechiensis is slightly larger than M. mercenaria, and its interior surface lacks purple coloration; thus, it cannot produce purple pearls. Nor are Mercenaria bivalves the only mollusks of the Veneridae family that can produce beautiful pearls. In the Fall 2001 GNI section (p. 233), one of these contributors (EF) described an almost perfectly round purple pearl found along the coast of France in a mollusk from the Venerupis genus (Lamarck, 1818), V. affinis decussate (Linnaeus, 1758). This mollusk (known as “palourde” in French) is commonly harvested for its meat, which is considered a delicacy.

The interiors of M. mercenaria and V. aff. Decussate shells, as well as the pearls associated with them, are similar in appearance (figure 3). The purple color is present at the shell margins, mainly around the muscle scars. Both pearls and shells display the same medium chalky whitish yellow fluorescence to long- and short-wave UV radiation, though it is weaker for the V. aff. decussata. 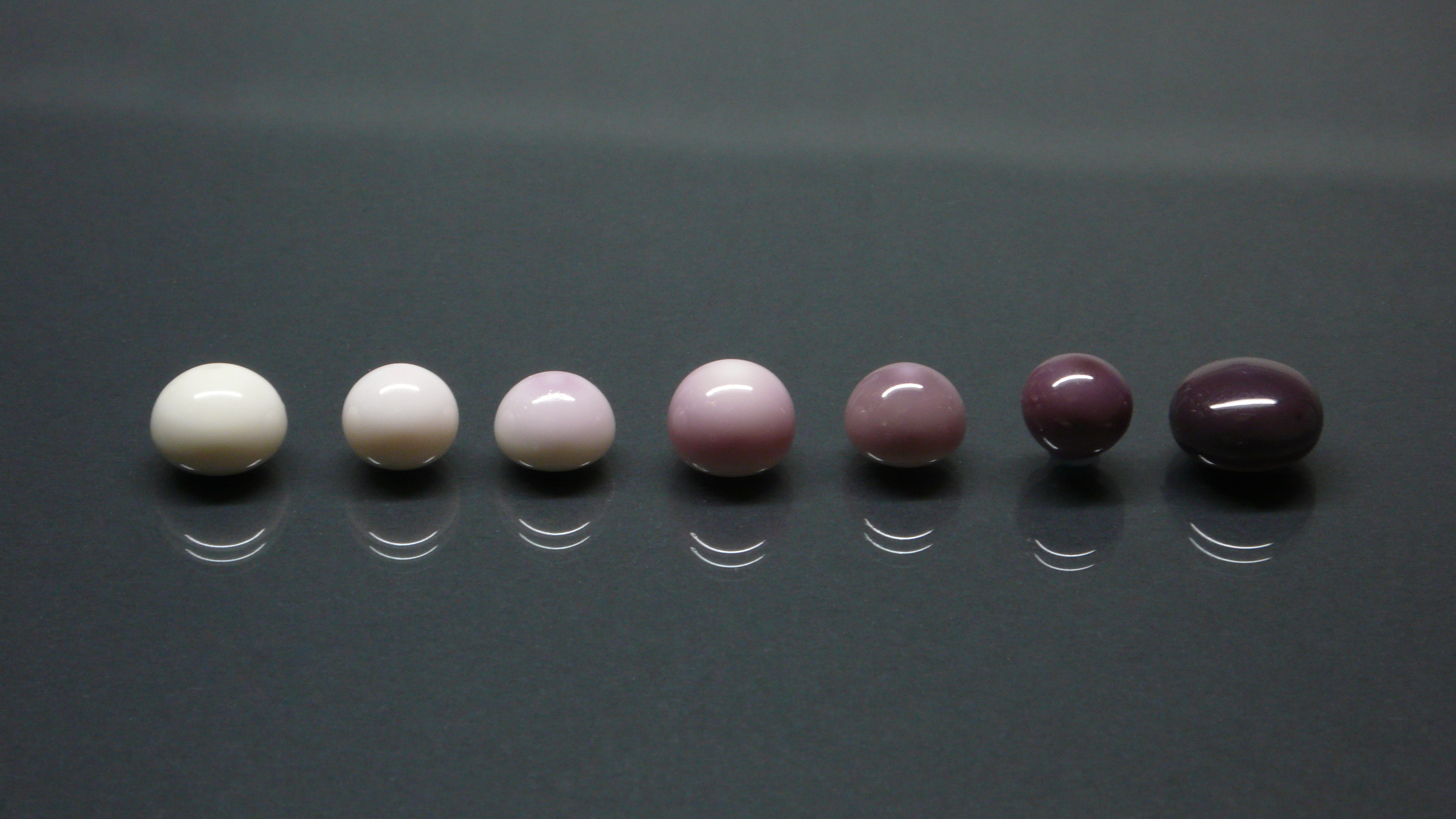 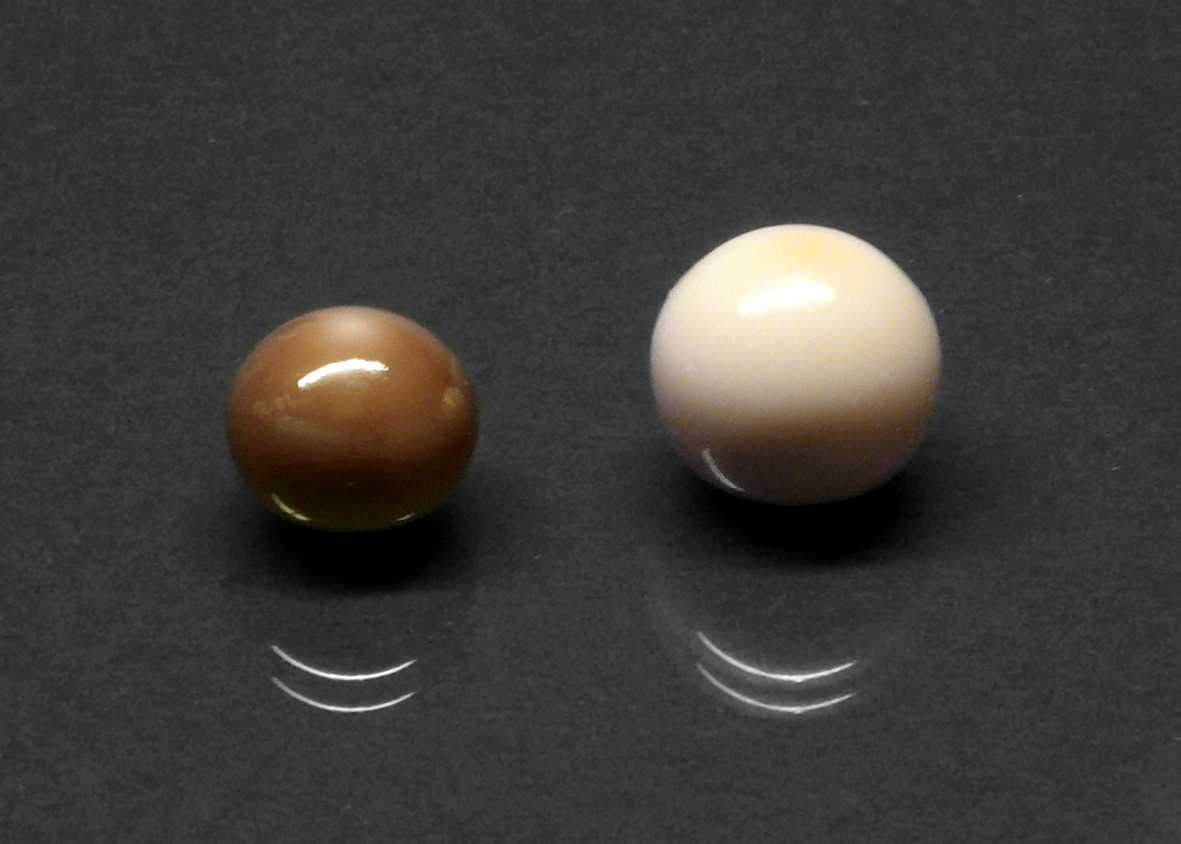 Figure 2. Note in these four baroque quahog (M. mercenaria) pearls that color variation in the bicolored samples is distributed along the pearls’ rotational axis. All are circled except the second sample from the left, but its ovoid shape is still probably due to pearl rotation during formation. The bicolored sample on the left is ~13.2 × 11.2 mm (11.62 ct). Courtesy of P. Lançon, Geneva; photo by Thomas Notari. 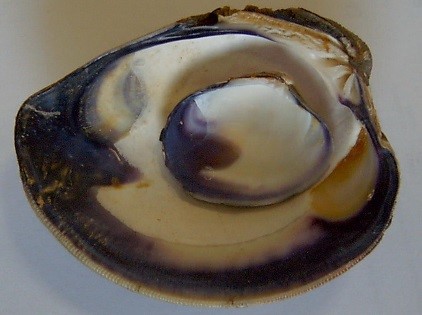 Raman spectroscopy of the samples in figure 1 (left image) and figure 2, using 488, 514, and 561 nm laser excitations, showed that the purple color was due to a mixture of unsubstituted polyenic (polyacetylenic) compounds (figure 4). To our knowledge, the origin of the purple color of Veneridae pearls and/or inner shells has not been previously reported. Similar pigments have been observed in freshwater cultured pearls (S. Karampelas et al., “Identification of pigments in freshwater cultured pearls with Raman scattering,” Fall 2006 Gems & Gemology, pp. 99–100). M. mercenaria can reach 12 cm in diameter, while V. aff. decussata mollusks from the west coast of France do not exceed 7.5 cm. Thus, the latter mollusks produce smaller pearls (rarely up to 6 mm) compared to those from M. mercenaria (rarely up to 12 mm). It should be noted that “gem-quality” natural pearls from V. aff. Decussate have been documented only once, whereas there have been numerous reports of gem-quality quahog pearls. 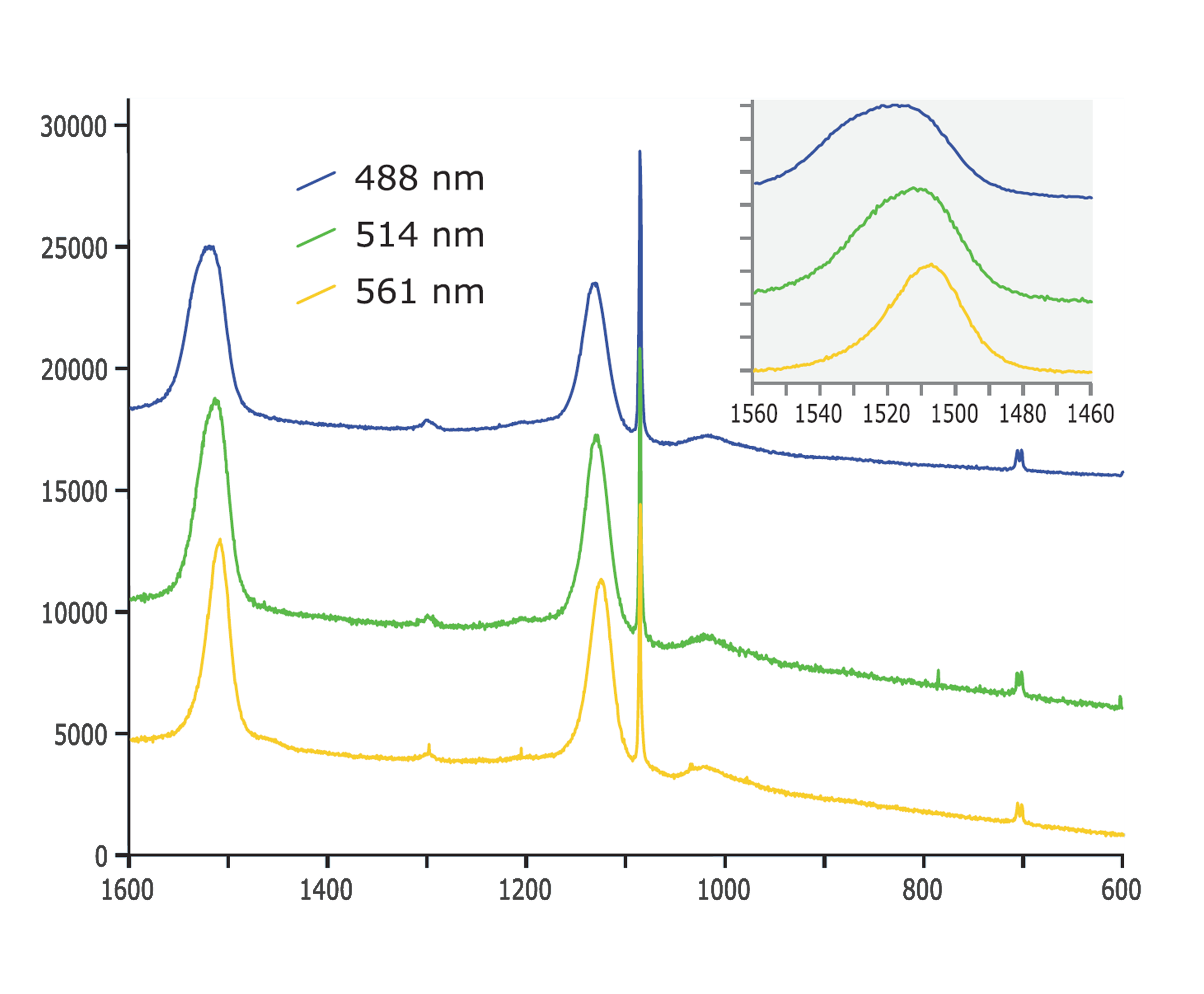 Figure 4. These Raman spectra for a purple quahog (M. mercenaria) pearl were taken at laser excitations of 488, 514, and 561 nm. In the region most “sensitive” to C=C stretching bonds (about 1500 cm–1, see inset), variations in the position, shape, and relative intensities of the peaks are quite apparent. This suggests that the purple color is due to a mixture of unsubstituted polyenic (polyacetylenic) compounds and not to a single pigment. Raman spectra on colored samples from V. aff. decussata showed the same peaks. All the peaks are normalized to the main aragonite peak at 1086 cm–1. The spectra are offset vertically for clarity.