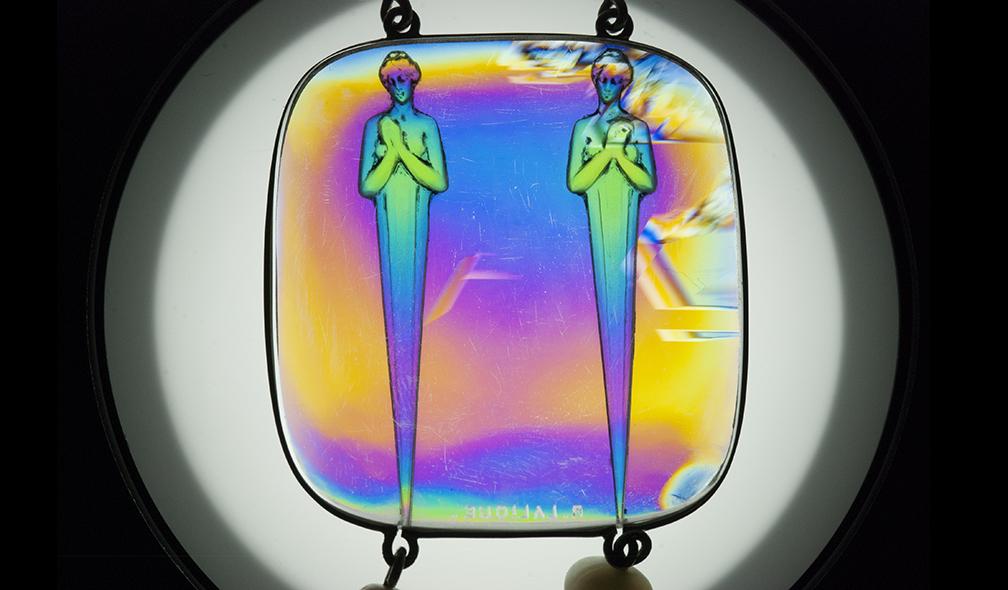 Singly polarized or cross-polarized light is often used by gemmologists when testing transparent and translucent rough or cut gem materials. The way the light is modified after passing through the material reveals important characteristics about the crystalline nature of the sample.

In October 2015, GGTL Laboratories in Geneva received for identification colourless pendant (~37.1 x 34.3 x 5.1 mm; Fig. 1) that displayed two human figures engraved in relief. The client indicated that René Lalique made the pendant. Lalique (1860-1945) was a famous designer and well-known for his glassmaking art, but he was also a jeweller who worked with a variety of gem materials (Passos Leite, 2008). 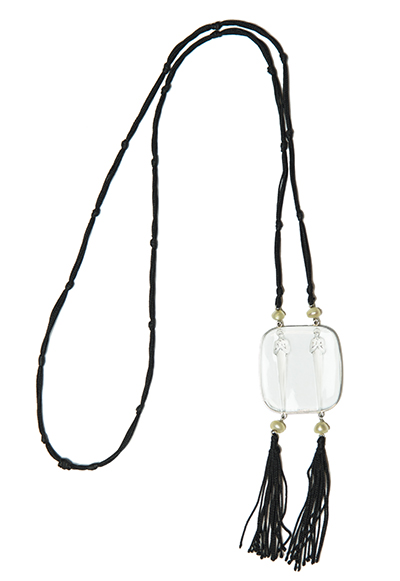 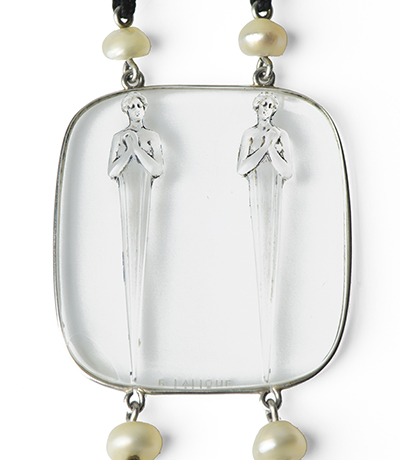 At first sight, the pendant appeared to be glass, but the cool sensation of the piece on the skin suggested it was quartz. (Glass has a lower thermal conductivity than quartz, and hence feels "warmer" than quartz.)

Initial gemmological observations were done using a binocular microscope, first in transmitted light and then with crossed polarizers. Bright interference colours indicated the material was anisotropic. When we observed the pendant in the direction of the optical axis with a glass sphere (used as a convergent lens known as a conoscope), we immediately saw a "bull's-eye" figure that is distinctive for quartz (Fig. 2). 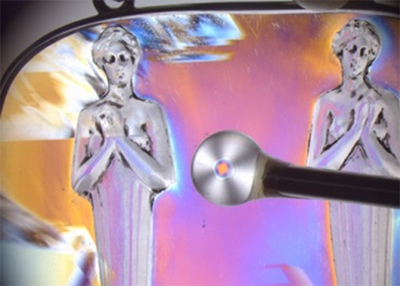 Fig. 2: Viewed with crossed polarizers, the pendant shows a "bull’s eye" interference figure with the conoscope, as expected for quartz. Distorted Dauphiné twinning interference patterns are visible in the minor rhombohedron at top and left. Photo by C. Caplan; image width ~28mm.

Quartz crystallizes in the trigonal system, and the tablet used for this pendant had been cut perpendicular to the optic axis (or three-fold symmetry axis). The common habit of quartz (Fig. 3) is an elongated prism (m) with rhombohedral terminations (r and z), and the crystals are frequently twinned (O'Donoghue, 1987). Viewed with crossed polarizers, the quartz showed angular interference colour patterns on the top and left edges of the pendant due to twinning of the minor rhombohedron (z) faces (again see Fig. 3). Consistent with the fact that there was no synthetic quartz available on the market during Lalique's time, the distribution and orientation of the twinning characteristics confirmed it was natural quartz (Notari et al., 2001; Payette, 2013). 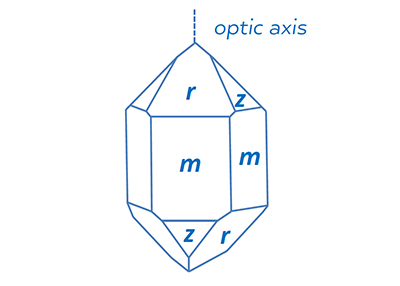 Fig. 3: Schematic representation of a quartz crystal with indexed faces.

This pendant provides a good example of how interference colours are influenced by the thickness of the observed material and by its crystallographic orientation versus the polarization direction of the light. The two groups of photos in figure 4 show variations in the appearance of the pendant as the analyser was rotated over the stationary polarizer, from the front side (top) and the reverse side (below). The human figures remain colourless in the front view, while they show interference colours in the back view. The colours observed between crossed polarizers are complementary to those seen between parallel polarizers (Fig. 4 below, third picture of each line). The appearance is due to a combination of diffusion and diffraction phenomena caused by the curved shape of the engraving. 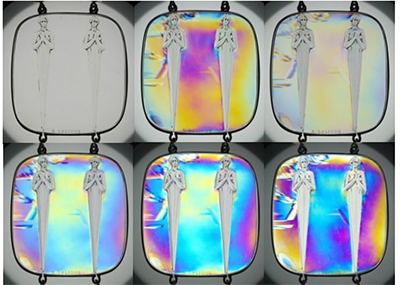 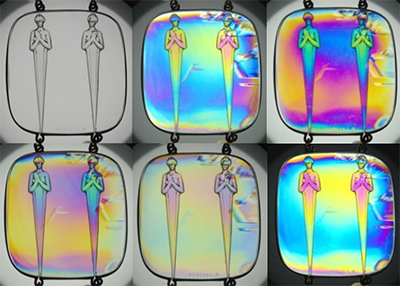 Fig. 4: This quartz pendant (~37.1 x 34.3 x 5.1 mm) shows various interference colours as the analyser is rotated over a stationary polarizer, from the front side (top) and the reverse side (below). Photos by C. Caplan.

Further, when viewed only with fully crossed polarizers, completely different colours are produced as the pendant is rotated (Fig. 5).

It is always interesting to examine gem materials with polarized light, and sometimes a simple colourless object can appear complexly beautiful. As shown by this pendant, such examination yields useful information and may allow one to distinguish natural from synthetic quartz.